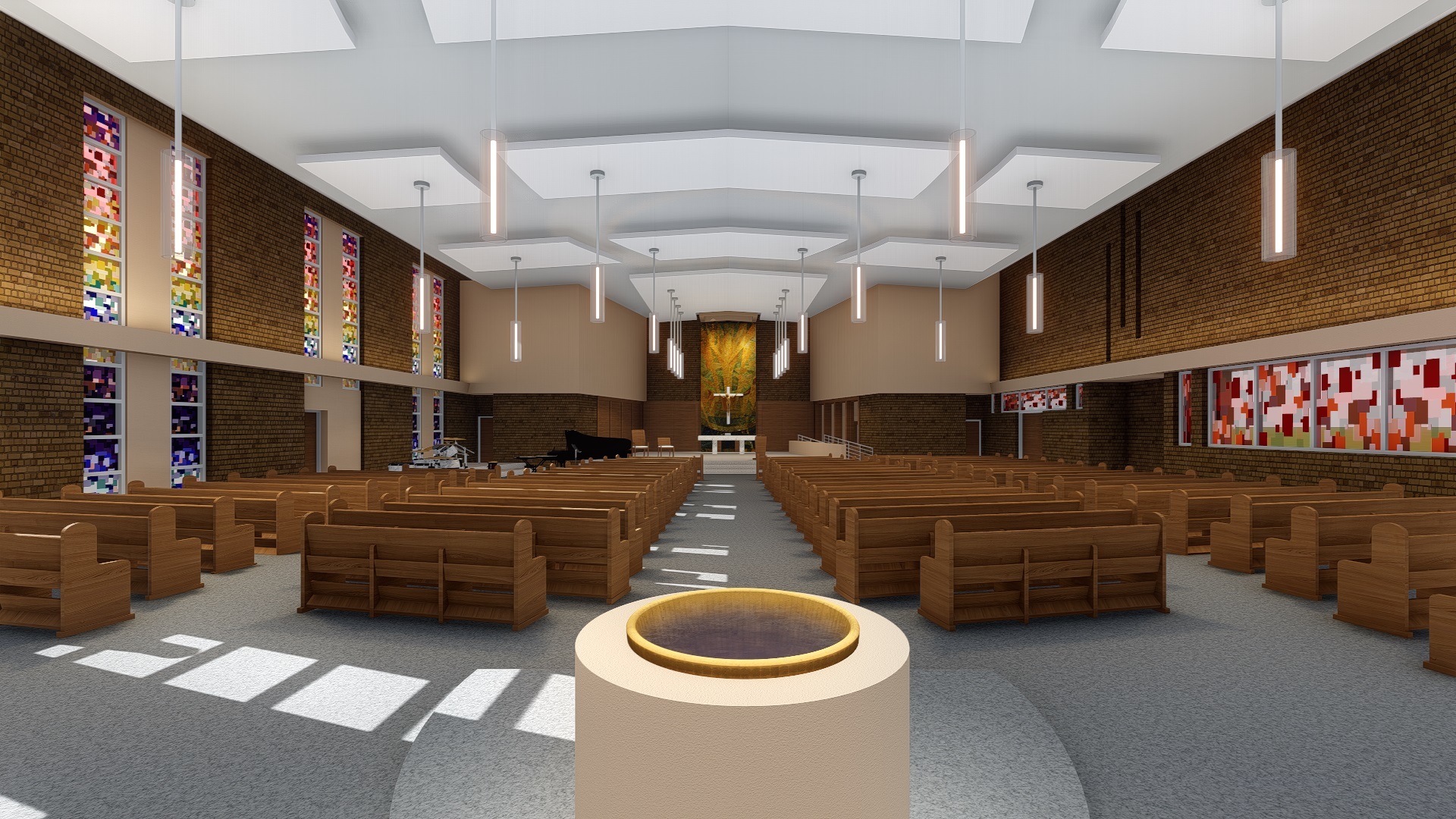 Welcome to St. John’s Catholic Church located in beautiful Pelican Lake Wisconsin. It is said that with the right map, a good strong back, and the beavers willing, you can paddle your canoe from Pelican Lake to the Mississippi River. With that connection, it is easy to see how those living in Pelican Lake are connected with the entire country. We welcome you, friends and strangers to know the people of St. John’s and feel welcome here.

“Where two or three are gathered together in my name, there I am in their midst.”
(Matthew 18:20)

The first Mass said in the Village of Pelican Lake, took place at a home/rooming house owned by John E. Rice. The house, a three-story, wooden building, still stands on the lakeshore south of the Pelican Lake Hotel and is vacant today. Fr. Saile would come from Antigo to say Mass about every three weeks, usually on a week day. The first church building was made of wood and built in 1907 under the pastorate of Fr. Toplac of Eagle River and Three Lakes, who built many mission churches in the area. Fr. Gerlitski and Fr. Shank from Eagle River then provided priestly services for St. John’s. Around the same time St. James Catholic parish in Monico and St. Mary’s in Jennings came into being and were serviced by these same priests. Fr. Shank told of times that he went to Monico and Pelican Lake for Sunday Mass, getting there by pumping a railroad handcar. On one particularly stormy Sunday the Catholics at Pelican Lake were positive that Father would not be able to come to say Mass. When Fr. Shank arrived at the church there was not a soul around. During Fr. Shank’s pastorate, an agreement was reached with the Bishop of Green Bay whereby the priest from nearby Elcho Holy Family parish took care of the spiritual needs of the Catholics of Pelican Lake. In 1940 St. John’s became a mission of Immaculate Conception of Rhinelander, WI. in the Diocese of Superior. At different times it became a mission of Harrison (for one year) and St. Joseph’s in Rhinelander (for one year). Since 1946 it has remained a mission of Immaculate Conception, now Nativity of Our Lord, with the exception of two years when it again was with St. Joseph’s during the pastorate of Fr. Richard Burzinski.

The little wooden church on a hill overlooking the big lake, withstood the ravishes of time. Once, when the church steeple was struck by lightning and started burning, the people sawed the steeple off just above the roof top thereby saving the church from complete destruction. In the 1950’s, the old church needed improvements. Tourists and year round residents began to increase the numbers of the small parish especially in the summer months. Sometimes, on a summer Sunday, two or three Masses were not sufficient, so more room was needed. Also the Diocese of Superior had closed St. Mary’s in Jennings and many from that parish joined St. John’s worshippers. After months of planning and fund raising, it was decided to build a new church. A lot, 150x250 upon which to build, was donated in memory of the Isadore Jansen and Mathew Porten families. Under the leadership of Fr. Arthur Shank, Fr. George Votruba and Fr. William Cary, a fine, brick church was built in 1958. In 1983, St. John’s gathered in the parishioners of St. James Catholic Church in Monico when the diocese closed that church.

The three communities that make up St. John’s Church have brought diversities and strengths to the parish. The church bell that rings at the beginning of Mass, came from St. Mary’s Church in Jennings. The sanctuary light came from St. James Church in Monico. The bell tower was built with memorials and donations from church members and visitors. Over the years many people have donated their time, talents and money to help make St. John‘s the fine church it is today.

An active Ladies Club has flourished from the beginning of St. John’s. The club is instrumental in serving the needs of the parish, especially the young people, and in the upkeep and maintenance of the building. A strong parish council continues to function as the lead group of the church. In 2002, Fr. John Gerritts became the only remaining priest serving St. John’s. Then, after sixteen years, he was reassigned to Hudson, Wi. and Fr. Thomas Thakadipuram, Fr. Michael Mclain(2015) and now Fr. Randall Knauf(2016)  became pastor(s). Additionally Fr. Randy serves as pastor of Nativity of Our Lord Parish in Rhinelander. Currently, St. John’s Parish serves 150 parishioners and 75 households. The people of St. John’s welcome all who wish to come and worship the Lord with them.